For learning how to use Ghidra to analyze and decipher code, I often find it helpful to analyze a compiled simple program for which I have the source code.

Below is the source code to a simple C++ program. The program manages a single stack data structure, accepts a list of strings, 1 per line, from the user, and then when the user is finished, the program will prompt the user for a string. It will scan through the stack for the presence of said string and if it matches (case sensitively) one of the strings the user just entered, then it will report a successful message. Otherwise, it will report failure to the user.

The above code has the following attributes:

The above can be compiled using the following line (assuming you have llvm clang, otherwise c++ or g++ as needed):

Furthermore, for a dose of realism, make a copy of it and use strip to remove symbols and other debugging hints from the compiled binary:

The second step will render the binary slightly harder to analyze, and also will make it about 25% smaller. This is a more representative example of the type of challenge you’ll face in the field.

I will also provide a copy of each for download here, just so that you may perform the analysis with minimal compiler variation:

Load Them Into Ghidra

Create a new Ghidra project, and import both files into it. 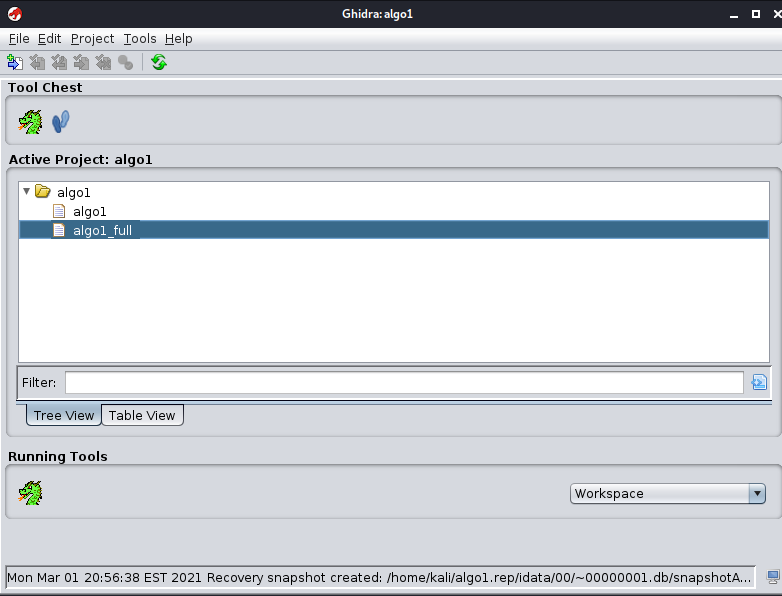 Once done, you may open both files (they’ll pop up in separate windows), and have Ghidra start analyzing them both.

Initially, the view looks pretty similar between both files. However, as you start to expand the contents of the symbol trees, you’ll see where the major differences are. For example, expanding the Classes branch: 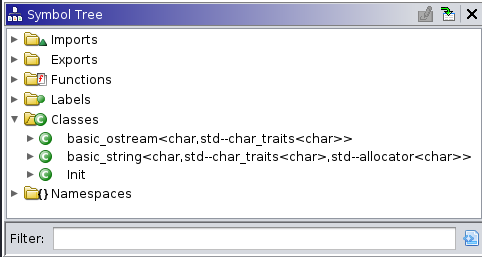 In the above examples, the first image is the algo1_full program, the copy of it that still contains all of the helpful debugging symbols. The second one is from the version of the program after these symbols have been stripped. What has happened here is that the strip program has gone through and removed any variable names, type identifiers, and other human-readable data that was entirely local to this program. In this case, the two classes defined in the source code, Node and Container were only defined for the scope of this program. The strip tool recognizes this, and removes these - largely to help conserve space. The consequence of this is that Ghidra no longer will be able to easily present these classes to you using their helpful names.

One thing notable about the above is that the stripped version of the program has a large group of functions with the name FUN_########, where the ######## is a virtual memory address. Whenever Ghidra cannot connect a function to a function name, it will auto-generate a name for that function that begins with FUN_ and add to it the virtual memory address of the beginning of the function. Since only a single function may begin at any single address within a program, this results in an automatic function naming scheme that is guaranteed to have no collisions. Thus, what you are seeing here is a direct outcome of using the strip utility on the program: Ghidra has to make up its own names, and as well has to try to “guess” the function arguments and return value types.

You’ll also notice, if you look a bit closer, that the version on the left also contains functions like _init, _start, main. Both versions of them, however, appear to still maintain the symbols for the std::string and various iostream operators and calls, such as getline. This latter observation is due to the fact that these symbols are referenced in external shared libraries (libstdc++ to be precise). That said, looking around at the code, it appears that the algo1_full seems to display less functions, than the stripped algo1, which would seem counter-intuitive initially - as both should implement and reference the same number of functions.

In algo1_full, if you expand the Classes again, and then expand the Container and Node types, you will reveal a number of additional functions. 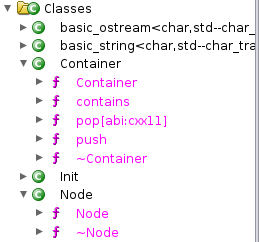 All of the class methods under both data types came up as bare functions in the stripped algo1 sample, while in the unstripped algo1_full, Ghidra is appropriately connecting them up with the data type that they operate on.

Finding the entry point is easy enough in both examples. For a typical program compiled with gcc or clang, the entry point is typically given the name _start. In the stripped case, Ghidra automatically assigns this the name entry as the default function name. A quick adjustment to make these consistent could be to rename this function with the proper name _start, in the algo1 program. So go ahead and right-click on the function name entry in the Symbol Tree, and then change its name to _start. You’ll notice that the function name entry has also been renamed in every other view it is used in. Ghidra maintains a symbol database, and whenever symbol edits are made anywhere within the code, corresponding fixes are made to the disassembled and decompiled program elsewhere, to reconcile it. 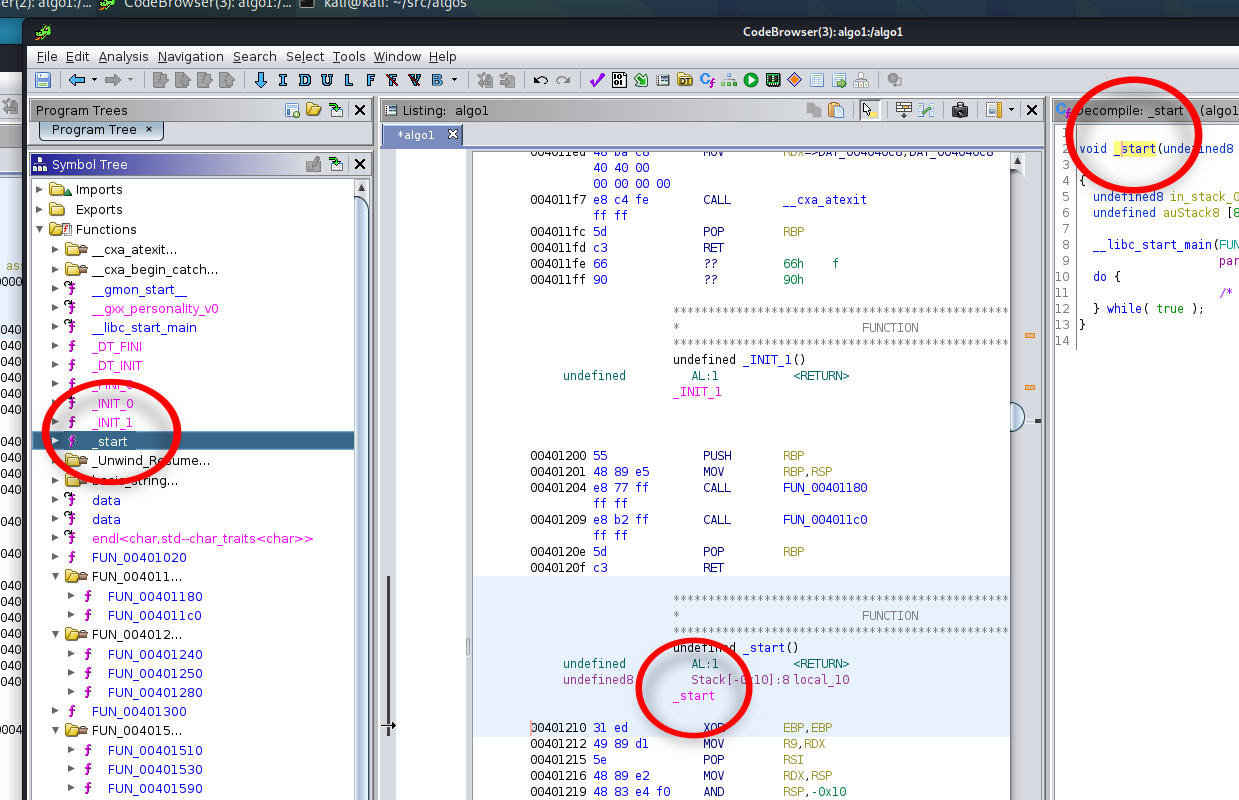 Within this entry point, the following code is disassembled from the binary:

The above code populates a number of registers, 3 of which are populated with function pointers, and then calls the __libc_start_main function, which, as its name suggests, calls the actual main function of the program, as defined by the author.

This is where we get into the details on needing reference material. For this particular scenario, the Linux Standard Base Specification can be helpful for answering our questions about what is going on here. In the above link, find the most recent specification, and choose the Core link for whichever format you’re most comfortable with - I chose the HTML version. There’s a section named Base Libraries which contains some documentation about the base libraries expected to exist on any Linux system that adheres to this base specification. The link for Interface Definitions for libc will direct you to a Table of Contents for symbols exported by the standard system C library runtime. In here, you should be able to find the documentation for the __libc_start_main function:

Reviewing the documentation, you can see that the function is defined as:

There are a number of arguments, but looking at the function prototype definition, as well as reaing the documentation, it becomes clear that the first argument is likely the main function.

In doing analysis, you will often find that you’ll have to employ a mix of references from both machine instruction manuals as well as system-level API macnuals. This is because there’s much more to the structure of your program than what the CPU dictates. The Operating System it is running under has at least as much influence over the low level organization of the program as the CPU.

Some examples that are really handy for malware analysis:

We can then look at the Decompile view, to see which function pointers are provided as arguments, using a much more straightforward prsentation than the disassembly allows:

From the above, the function pointer FUN_00401300 corresponds to this first argument, so it is likely the main function. Double-click on FUN_00401300 to navigate to this function in the disassembly and decompiler views. Within the disassembly Listing view (the central, main view), right click on the name FUN_00401300 and choose Edit Label. This brings up a new window within which you can change the function name. Similar to before, when we modified it in the Symbol Tree, this modifies every reference to that function, so that Ghidra will behave as if this function was named main all along. 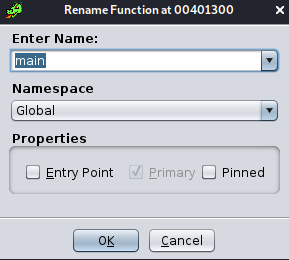 While here, another thing that will be helpful to us is to modify the function signature for main. While we know that main is traditionally defined as int main(int argc, char **argv), or similar, Ghidra seems to have defined this function as:

We can right-click on the function’s name in the Decompiler view and choose the option to Edit Function Signature. This will pop up a window, in which we can free-hand edit the function signature in the top textbox. The table displayed beneath it displays the function argument types, as well as which registers they must be passed in to the function (this is the reason for all those register assignments earlier). Modify the function signature such that it uses the one I listed earlier, as the typical main function signature, so that the dialog contents look like this: 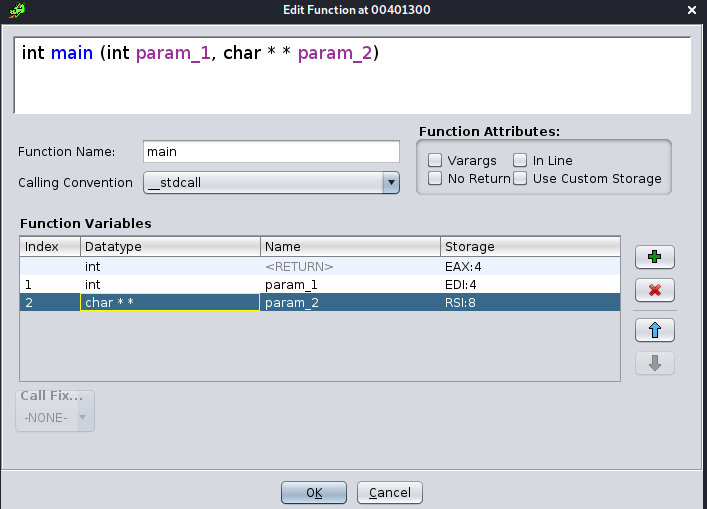 Note that in order to get the arguments table to update, you may need to click within it first. An alternate way to edit this signature is to double click in any of the cells in the table. The table also allows you to add or remove arguments, as well as move them up or down in the order. Once you click Ok, you’ll observe some minor changes occurring in other viewports, as Ghidra updates to accommodate your function signature change.

Unlike IDA, Ghidra has a decompiler built in as a core feature of the software. Ghidra accomplishes this by extracting disassembly from the provided binary file, and then this disassembly is translated to a generic instruction set that’s specific to Ghidra, named P-Code. This P-Code is then used to perform the translation to decompiled source code (for C, C++, Dalvik, and Java). This also can have further implications for re-targetting, or attempting to translate a binary from one architecture to another.

The Ghidra pipeline to decompilation is described below.

To perform the conversion from native machine code to P-Code, Ghidra implements a translation definition language called SLEIGH. Each of the processors that Ghidra supports utilize one or more “SLEIGH specifications” to perform the 2nd stage translation from Disassembly to P-Code.

The CPU specifications defined for Ghidra are located in the Ghidra/Processors folder of the project.

By default, Ghidra hides the P-Code representation from us. If we want to we can reveal it in the Listing view, by first clicking the Edit Listing Fields in the top-right corner of the Listing view. 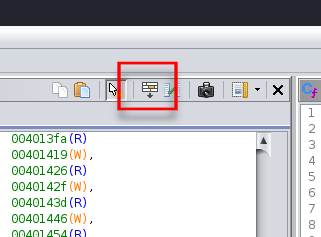 Right clicking on it brings up a menu that allows you to choose Enable Field to activate it for display in the listing. Doing this will also highlight why this feature is hidden from view by default: for each machine instruction, there are often 3 or more PCode instructions that it evaluates to, resulting in it increasing the vertical size of the disassembly listing view by 3x-5x.

The following screenshot of a portion of the main function we labeled earlier highlights this: 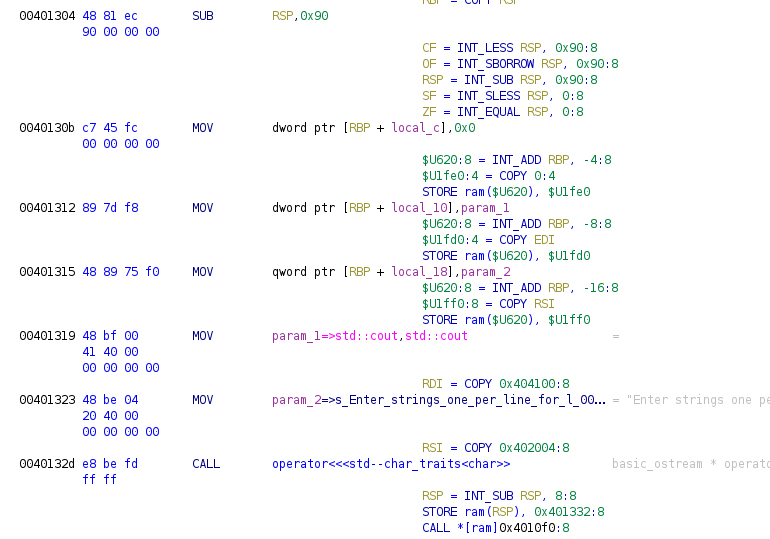