The demonstration that we’ll be doing today will walk through a number of files that I generated by running the following utilities on my compromised Win7 VM, after performing some actions through the Pupy RAT shell.

These analyze the following aspects of the system, to assist the analyst in gleaning information about how the malware behaves on the system, and what it did:

An archive containing many useful tools, including those discussed today, is available here:

Using winpmem on the Windows VM, system memory was captured using the following command, and the resulting *.aff4 file was copied into the Kali VM:

Next, the PhysicalMemory artifact was extracted from the *.aff4 archive using unzip in Kali:

I have created a file named vol_mods.txt which contains a list of volatility modules that are somewhat quick to run and yield some decent output. I downloaded the above-linked file into the Kali image, and I ran the following script from inside the memdump folder, created above:

The above will run a loop across each of the volatility modules and place the output for each into a textfile under memdump/ that is named after the module.

There is a very useful timeliner.txt output that combines a lot of the data from other data sources into a timeline of activity. Included in this, as well as in its own analysis file named iehistory.txt, is the Internet Explorer history - which is ingrained in Windows versions prior to 10, as the web browser was a core component of the operating system.

I have generated some example data here:

Using Mft2Csv.exe, I generated a timeline of filesystem activity that matches the format that a tool like log2timeline would output. However, a nice feature of Mft2Csv.exe is that I can execute it from within the running system:

When running Mft2Csv, it will be important to keep in mind that it creates a new folder where you tell it to place all of its output files, so you only need to provide a destination folder where you would like this to be created, such as Desktop or Documents or even the network path of a shared folder you’ve configured in VirtualBox (\\VBOXSVR\sharedfolder\ ).

This will create a large *.csv file inside of a timestamped folder that will have all of the file timestamps tabled out, one per row, so you will not only be able to navigate files, but also the timeline of their lifespan. These timestamps represent the 4 timestamps that Windows NTFS keeps track of for each file, typically described as MACB or MAC(b):

The following documentation from Andrea Fortuna discusses this convention and how Windows uses them, in detail:

Some files that we will go over from this:

Depending upon the size of the filesystem, the CSV file generated can get quite large. I recommend installing gnumeric. Under Kali, you can install this with the following command:

For gnumeric, don’t open the CSV directly. Instead, open the program as if you were creating a new spreadsheet, and then from the File menu, choose Import Data, and then Import Text File… to import the data. It will take a short while to parse through the whole data, but the dialog it presents will provide you with an option to separate fields using the pipe (|) character. 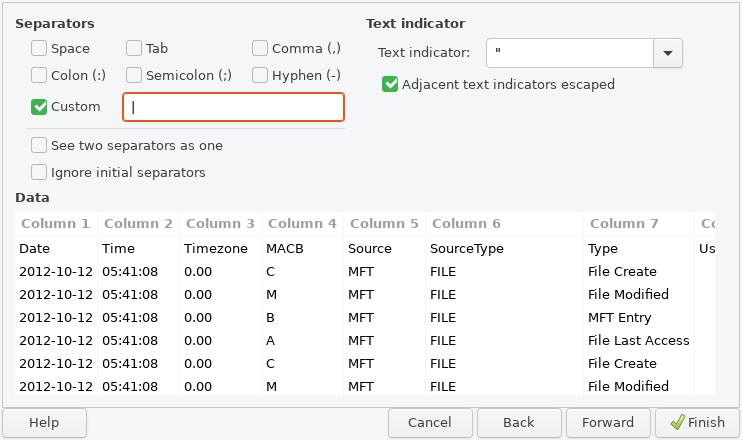 I’ve used the core Windows utility regedit.exe to export a text version of the Windows registry. Some of the tools used in volatility as well as autoruns will analyze data within the registry. We will look at the file format and discuss its contents, as well as review how the known persistence data appears within it.

The dump of my registry data:

Key to malware is maintaining persistence on a system. This is basically the act of making sure that the installed backdoor maintains or continues to attempt to create a connection back to the command and control system, across users logging in and out, and across reboots and system moves (such as a laptop going from school, to work, to home, to Highland Coffee, etc.).

Microsoft released an OS inspection utility called autoruns that will analyze registry, installed special file locations, services, and some other aspects of the OS, to identify if anything is configured in well known locations for auto-loading on boot.

An output of this utility is provided here:

Additionally, surveying the system for active network connections can be done using the built-in netstat utility. A common approach is to run it while disabling IP->name resolution (-n speeds up running), display all open and listening ports (-a), and associate each with the application and PID that own them (-b).

A copy of the one I created is here:

The notes I took during my analysis video are below: